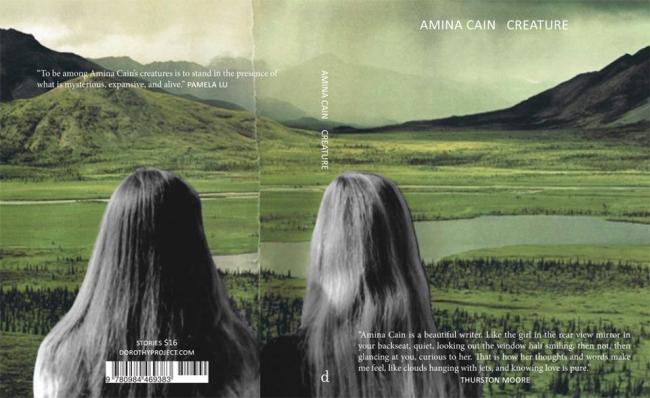 Myself, alone, in my bed, is a story.

Creature is a quiet place.

Delicate too, and therefore deceptively strong. I imagine Amina Cain staring at a block of marble until the story takes shape. “Together the rocks formed a micro-climate for plants that grew in the shade I made.” This is Cain’s prose. Tendril sentences shoot up and form stories in themselves, wrapping around the text, growing from inside it.

Creature moves according to its own laws. Characters wash, they meander, they consider art. On the cover Thurston Moore compares Cain to the girl in the backseat, looking. I know what he means. Cain pays attention. He goes on, “That is how her thoughts and words make me feel, like clouds hanging with jets, and knowing love is pure.”

With prose like “Softly, softly the books” you’re floating through wide open spaces, fields of wildflowers, carefully arranged stone towers, then shadows drip across the text, four ornate wooden chairs staring at a whipping post, a girl being beaten by her lover, master, rapist.

A few weeks ago, a visiting Benedictine monk who was giving a talk in the dining room spoke for a few minutes about reading. I might get this wrong, but I think I remember him saying that in his tradition the word is supposed to send a person into the great silence. Just a little bit of reading is enough.

Cain writes only what can improve the silence.

Immediately, she reminds me of Duras. Quoting Blue Eyes, Black Hair makes so much sense. Duras haunts you as you read her. She seduces you and it hurts. There is so much beauty in her darkness. Both Duras and Cain’s texts expose themselves so honestly that it feels like concealment.

The curtain moves, and I like the way it matches something inside me. But I know that a curtain shouldn’t match me, and that I shouldn’t like it.

There, too, is so much beauty in Creature’s darkness.

Without the traditional story structure cage, these stories are fertile, and feral. You can’t just demand this text dance and do everything for you. You’ve got to water the words, stop at the end of each paragraph and listen to your breath, then watch as the images flood. These stories are for you, they move inside of you.

Claire Donato had a similar experience reading Creature. Here is her review on HTMLGIANT.

It’s hard not to feel connected to yourself when you’re in a hot bath.

Like a creature that won’t get down from the bed, words are coming to me.

So simple, yet not plain language. She is not trying to get a point across as quickly and thoroughly as possible. This is a feeling she’s transcribing, a kind of sacred ritual, an ambiance, a mood. It’s as though she is your yoga instructor, guiding you through meditation. She treads softly, she rings the gong, where were you for 20 minutes? Transported, just as her characters become.

These characters are often writers, and as writers they experience visions, words happen to them. Suddenly narratives are becoming, they’re braiding, inhabiting each other’s spaces. In The Beating Of My Heart, the writer imagines an actress portraying her last heroine. All three of them speak. Perspective flows from one character to the next. I feel them as one. I read all her stories this way.

Except for the narrator in Furniture, Table, Chair, Shelves. Unlike the other voices, this one is unapologetically privileged. She feels like an intruder upon the text. She lacks the compassion of the others. The protagonist in Gentle Nights gets an aristocratic dress, she feels uncomfortable with it. That night she says, “We watch something violent on my laptop. It will help me wear this dress.”

Looking away from violence is to want to remain naïve. This is a luxury. An awareness of that takes the sting out of the garishness of fashion, but only slightly, and it wears off. When you are privileged, you have to constantly remind yourself that most of the world isn’t. To avoid this is to avoid what it means to be human and decent.

This is not easy. There are days, weeks when I want to avoid the news. When those youtube videos make me vomit and I become so violently angry or terrified or furious at myself and embarrassed because I’m terrified. The chemical attacks happened when I was nursing seven hours a day. At that time in my life I cried all the time. I cried because I was grateful, because I was in awe, because babies are fragile and strangers can be so kind. My body needed to gush, and when I encountered grief, my dams burst and I couldn’t stop. So I turned away. My husband and NPR could fill me in, but I couldn’t look at raw footage. Still, I struggle. My heart breaks every time. I become nauseous. #BringBackOurGirls #YesAllWomen Ukraine. Syria. This is the world we live in. This shit happens every day. #NotABugSplat

Cain is so painfully aware of that.

Awareness leads me to art. I need it. I need it to understand. To escape and to remember. I need it to shift and move me. I need it to teach me about myself. In Delicately Feeling the narrator tells a play she has just seen to fuck off. This is the appropriate reaction to art that disappoints you.

When literature speaks to you, in exactly the right way, you feel less critical of yourself. Less alienated. Less self absorbed. #BooksNotGuns It’s hard to imagine a racist, sexist, homophobic–or anything else equally stupid–bibliophile.

After friend breaks up with the character in Gentle Nights,

On the other hand it confused me, and made me feel as if I didn’t know myself as well as I thought I did, because I loved her and I believed I had shown her this in other ways. Maybe I’m not as in touch with the harmful parts of myself as I am with the loving.

As the mother of destruction, I have little time to be in my head. My eyes are focused, and unless she’s asleep, one eye is always on her, because if it’s not, she’s standing on the dresser, licking a cheese grater, grabbing strangers’ shirts and yelling COLORS at them. When I do have an hour to myself, I want to be alone. My social life is miniscule. I read one book a month, 75% less than before Aria. I try to write as much as I can, but that suffers too. I have lost friends because of this.

Cain and I are very different writers. I am a messy writer, I write from my messy body in my messy home. I admire her cleanliness.

We do have this in common:

Sometimes I’m extremely frustrated when I write, and in moments I am extremely scared. I never knew it was possible to be scared while working on a story.

This is not vanity, not a fear of failure, or success, but a fear of the rush–of the magnitude of art.

Because inspiration emanates from within the body, and because I am a hypochondriac and fearful of my body, this rush frightens me. Inspiration hits like cocaine. It’s euphoric and stimulating but unlike cocaine the addiction never interrupts the moment; with cocaine, you’re always servicing cocaine.

Compassion and tolerance and curiosity grow in these pages. This book makes me want to be a better person. To throw out all my belongings and travel. To spend less time on the internet. To do yoga more regularly, eat less sugar, buy more plants, and calm the fuck down.

From the always wonderful Dorothy, a publishing project, Creature was fucking great.