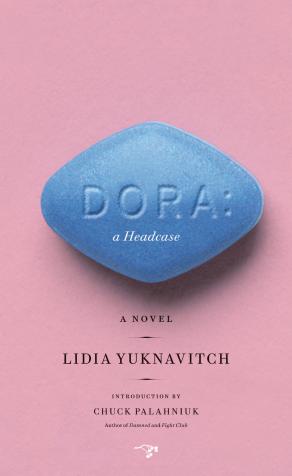 Dora, “the true ‘mistress’ of the Signifier.” (Cixous)

Given the importance of Freudianism, it’s easy to see the feminist attraction to Dora. For Hélène Cixous, Dora is “the one who resists the system, the one who cannot stand that the family and society are founded on the body of women, on bodies despised, rejected, bodies that are humiliating once they’ve been used.”

In other words, silence is sometimes the only power a woman has. It’s an active refusal of male mastery. Dora’s silence is a revolt against the patriarchal suppression of female bodies and feminine language.

But lately that doesn’t seem good enough for me. It’s not aggressive enough. Silence as rebellion is outdated. We can do better than that.

Silence requires the other to fill in for the silent one. Silence can give the other control over the situation. The other interprets. The other assumes. The other speaks for you. Much like an anorexic who diminishes her body to take up less space in the world, she insists she is asserting agency over her body, claiming it as her own.

On the one hand, I get the feminist impulse to take control of your own shape. But the other hand in my pocket feels like this kind of control is a last gasp attempt at agency. A consolation prize. It’s a resistance to total subjugation, sure, but only within an admission that you are already engulfed. I consider it like euthanasia, or suicide. You are dying, but goddamnit this disease/enemy/government is not going to take you; you’re going to control how and when you die. It’s all you’ve got.

IRL, Freud slapped an Electra Complex onto her file, and then after eleven weeks of erroneous insistence on misplaced sexual desire for her father, Dora said, Fuck it. I’m out. Ultimately, Freud considered the case a therapeutic failure. Because, obviously, it was. It’s also the case most cited to underscore Freud’s blatant misunderstanding of women at best, his misogyny at worst.

Inside the Fuck it. I’m out. breathes, boils, creams Yuknavitch’s novel, Dora: a Headcase. 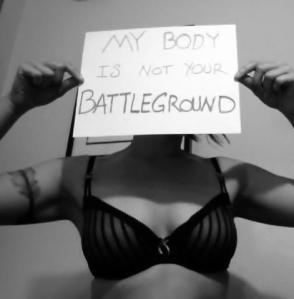 One of Yuknavitch’s call to arms on “facehooker”, asking her friends to post pictures of their bodies with texts beside them such as, “My body is not your battleground.”

To Yuknavitch, Dora is not a passive symbol, an object to be interpreted, a dull skinsack obsessed with her father’s penis. Dora is a clenched body, blowing fire and recording the damage. Her voicelessness is not a silent protest. She is its victim. It happens to her. But voice is just vocal chords bumping uglies. It’s just a sound. This Dora never loses her proverbial goddessmothertongue voice. This Dora is never silent. She writes.

She gets her revenge.

In the novel, Freud is barely a match for Dora. You even pity him sometimes, and then you remember him saying “women are ‘mutilated’ and must learn to accept their lack of a ‘penis’,” and you think, Carry on, Yuknavitch. Carry on.

After all, he brought up mutilation first.

Some will think that Dora is a monster. That her friends are delinquents, rejects and riffraff. But they are a family. A sweet and loving substitution for the fucked up reality that is “family”. I so wanted to be part of their circle. Popping pills, playing dress-up, and making art. All with their whole lives ahead of them. Young love, young rage. She certainly made me nostalgic for high school. And I couldn’t agree more with everyone who said Dora: a Headcase is this generation’s Catcher in the Rye. I can’t wait to show it to my daughter.

What I love most about Dora: a Headcase (and I pretty much loved everything), is Yuknavitch’s subversion of Freudian “daddy issues” into the trauma of the withdrawal of the Motherbody. Long ago Dora’s mother checked out. She was there, and not there. Silent and drinking, drowned. Are you my mother? Dora asks, demands. Nothing. Herein lies the roots of her breakdown. On the surface of a spoon, she lives alongside her mother’s ghostly reflection, and it rubs her raw. Mother, why weren’t you there for me? Mother, what are you good for?

I’ve always felt the world of mothers and daughters is often overlooked. There’s so much there. I feel a goldrush will soon be coming on us readers, and I can’t wait to devour it all. Because unlike the breadth of the father and son trope, the mother and daughter trope is so untapped. Let’s dig, let it all gush.

And just like Cixous implores in The Laugh of the Medusa, LADIES WRITE YOUR STORIES. Don’t let others interpret your silence. The patriarchy has been doing this far too long. Give them hell.

I’ll leave you with Dora.

You know what? Seventeen is no place to be. You want to get out, you want to shake off a self like old dead skin. You want to take how things are and chuck it like a rock. You pierce your face or you tattoo you skin – anything to feel something beyond the numb of home. You invent clothes other people think are garbage. You get high. You meddle with sexuality. You stuff your ears with ear buds blasting music so loud it’s beyond hearing, it’s just the throb and heat and slam and pound and scream of bodies on the edge of adult. You text your head off. You guerilla film. We live through sound and light – through our technologies. With our parents’ zombie life dope arsenal at our fingertips.

6 Responses to Dora: a Headcase