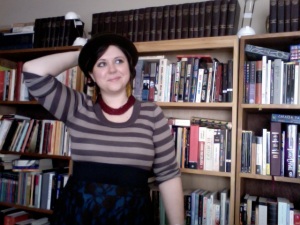 I’m overweight. At times, this consumes me. Then, immediately thereafter I feel like a bad feminist.

As Judith Butler writes in her 1988 essay, “Performative Acts and Gender Constitution”: “Performing one’s gender wrong initiates a set of punishments both obvious and indirect, and performing it well provides the reassurance that there is an essentialism of gender identity after all.” This tension—the idea that there is a right way to be a woman, a right way to be the most essential woman—is ongoing and pervasive… Butler’s thesis could also apply to feminism. There is an essential feminism, the notion that there are right and wrong ways to be a feminist, and there are consequences for doing feminism wrong.

Sometimes I feel fucking fantastic. I look at myself in the mirror and fall in love all over again. But then other days I feel like such a pathetic glowworm.

I know I’m supposed to forgive myself: I just had a baby! And I’m still nursing her 16 months later, so I’m hungry, like all the time. Things have been stressful: out of work, flooded with rejection letters, exhausted, moving, temporarily squatting next door to the house where I grew up, back in the neighborhood that displays the scars from my bullied years at Catholic school.

Then suddenly my suffering isn’t suffering at all.

Allow a moment from Girls.

Adam: “You think that just because you are 11 pounds overweight…”
Hannah: “I am 13 pounds overweight, and it has been awful for me my whole life!”
Adam: “Holy fucking shit. Here’s the world’s smallest, tiny violin playing ‘My Heart Bleeds For You.’ Fuck you! You don’t know struggle…

I’ve lost friends over the illusory bifurcation of feminism, because sometimes I’m on the wrong side. I’m in a heternormative marriage, one on which I’m emotionally dependent.  If we’re fighting, I am not operating at one hundred percent in any other sector of my life. To some, this is a sin. Much like marriage in general. To some, I willingly signed myself into a system that oppresses women. Simone de Beauvoir famously refused to marry Sartre on existential grounds. Because how could she, or he, be free if they belonged to one another? Or, if you like your feminism angrier, Andrea Dworkin says, “Marriage [is] an institution developed from rape as a practice.”

In the end, obviously, I decided one could marry and still be a feminist. I drew some lines though. Our marriage was a joint decision. I am both proud and glad that there was no proposal, no engagement ring, no traditions where I’m put on a pedestal, on display, given a day to feel as pretty as a picture, veiled, dipped in purity, white as a dove, given from one man to the next. Weddings depress me. So we didn’t have one. And I never took his name.

I’m not cursing any women who have done things differently though. (Freedom is the freedom to chose, after all.) For a while I did consider changing my name. We knew we didn’t want to hyphenate our children’s last names (as that would only kick the can further down the road), and we didn’t want to combine our last names into some hideous portmanteau either. I liked the idea of the whole family sharing one name, but my gut told me to keep my own name. So I did.

There, my gut lead me to a decision that made me feel like a good feminist, but now, its prominence, its protrusion is leading me into a double-edged shame spiral. From vanity to fraud, this gut has got to go.

I’ve started running. And while I’ve always exercised here and there, it’s never been regimented, and it was never running, not really. I would do yoga, work the elliptical machine, ride a bike. All indoors. Running outside is a completely different animal. I’ve always wanted to become a runner, to train for a marathon, and whether it was laziness, or smoking, or my migraines, I have always found a reason to discourage myself. Then three things converged.

1. We are temporarily living in my old neighborhood where I grew up. One that I’ve mostly avoided as my parents have long since moved out of the south side. One that unequivocally reminds me of Catholic school and its ignominious end.

2. I’m overweight. More so than usual. And my metabolism is slower than congress.

Now, I run through distant settings, mirages, places full with childhood memories, with fear, shame, and self-pity. With hope and anxiety and immortality. Ethereal scenes made concrete under my crunching, aching feet, thinking about the strain, the sheer physicality of hurling my jiggling body through space, until I crash into a moment, something someone said, something I said, or did, or was done to me. Ghosts of friendships past. Fingers pointing. Whispers. Derisive laughter. Remembering what it feels like to have a rock thrown at your head. The first metallic taste of betrayal. My tendon then gives out. Frustration. Self-pity. Self-loathing. Looking for a way out. To stop. Retreat. Then I just keep going.

The fantasy is that as I run these bad memories will melt away. Not disappear, but that I can run through them, run toward something that resembles healing.

This a spiritual journey. Hiking into the blaze of her grief and then right through it. Beating, scraping, blistering, burning her body with every step. In a pair of boots a size too small. Unshowered. Unkempt. Singing to warn off bears. Stomping into the unknown. Feeling weak. Feeling like a hardass motherfucking Amazonian queen.

No, I need this. More of this. I want a spiritual revolution. I want to feel like a hardass motherfucking Amazonian queen.

The bullying from Catholic school isn’t on my mind much (meaning, if we hadn’t moved here, it would barely be on my mind at all), but it is the genesis for a great deal of my insecurity. I want to run through the source, then run through the rest. Which includes the guilt over the possibility of being a bad feminist.

I don’t like being fat. Body shaming is bad. But wanting to be healthy is good.

Feminism is complicated. There are so many inherent contradictions, problems, glass ceilings. For instance, wanting female protagonists to be strong warrior types, but then again, complaining when they don’t have these “masculine attributes” could mean that feminine traits are something negative. Hate femininity as it was bestowed or reclaim it? This is what I feel is at the heart of feminism’s polarization.

Later in the essay, Roxane Gay says, “The most significant problem with essential feminism is how it doesn’t allow for the complexities of human experience or individuality.” BAM. That’s it. That’s exactly it.